Why Not Getting What You Want Isn't Always A Bad Thing

A friend of mine from high school is working on a spiritual/devotional book for athletes and he asked me if I would write a short piece for one of the sections.  After writing it, I decided that I would share it here as well since I know that I don't normally share too much about my life besides the usual day-to-day activities.  So this is my personal story about a time when I didn't get exactly what I wanted.

"Eventually, all of the pieces will fall into place.  Until then, laugh at the confusion, live for the moment, and know that everything happens for a reason." 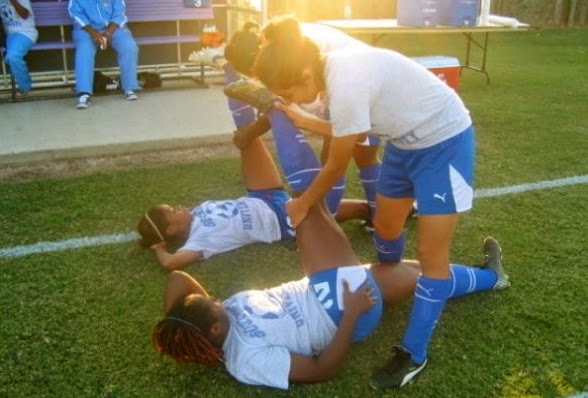 Growing up, my mother always told me not to worry about anything because God had a plan for my life.  "If it's for you, then no one can take it from you."  The words sounded nice and they were comforting at times, but I did not always believe her.  These words always seemed like more of a consolation prize than anything else; no one ever wants the consolation prize.


During my junior year of high school, I tried out for a new club soccer team.  I had been playing soccer for years and it was the only sport that I really, truly loved.  At the time, this team was everything I wanted.  I would be playing for a bigger, wealthier club, that could afford to send the team to showcase tournaments across the border.  I will not say that I necessarily had a plan to play college soccer, but I wanted to travel and play the game that I love; I wanted to do that with this particular team.

Throughout the trials, I travelled with the team to Philadelphia.  I played in one showcase tournament and I was allowed less than forty minutes of total playing time.  Needless to say, this was rather disappointing.  Following that tournament, I was notified that I did not make the team and that I would be better fit for another team, the “B” team.  Nobody wants to be told that they are a better fit for the “B” team.  I was so disheartened and disillusioned.  In short, I was not good enough.  The coaches fluffed it up with a lot of comforting words.  They told me that the other team would help me develop my skills and build my confidence.  They told me that it would benefit me much more than playing for their team ever would; once again, a consolation prize.

I started my season with my new team and all of a sudden, I started receiving emails and phone calls from American coaches.  They wanted me to come play soccer for their schools.  I was so confused as to how they knew who I was.  I never sent out any player packages and I never made one of those fancy athletic online profiles.  I asked one of them, “how did you find me?”  He told me that he saw me play in Philadelphia and that I was very talented.  I had potential and I was good enough.  Although I never had any plans to play college soccer, I accepted a scholarship to a division 1 school in Louisiana.  This was something that I never imagined for myself, but it happened.  I absolutely loved my four years in Louisiana, because I learned so much about myself and what I want to do in life.  Louisiana helped to reinforce my dream of becoming an attorney.  I had amazing mentors at my university and the faculty was instrumental in really pushing me to pursue my dreams.

What does this have to do with the “B” team you might ask?  Simple.  As I sit on campus at my law school today in California, I realize that I probably would not be here, were it not for those few “wasted” months my junior year.  At the time, I didn’t understand why I was not being given what I wanted.  It was not until recently that I looked back and realized that maybe God had bigger plans for me and this was the road I had to take to get here.  Now, I understand.  Had I not tried out, I would not have travelled to Philadelphia where those forty minutes of playing time would grant me the chance to play college soccer.  I never would have moved to Louisiana and who knows where I would be right now?  Probably not in law school.  I know now, that life happened the way that it did for a reason.  I was with the "A" team for as long as I needed to be and not a moment longer.  I don't regret it.  I should mention that playing with the “B” team was not the worst thing in the world.  Turns out, I was reunited with so many girls that I played soccer with growing up.  I never really did connect with any of the girls on the “A” team, but here, I was surrounded by friends.  Looking back, I ended my senior year of high school, playing the game I love with the people I love.  I created more memories with a team that I “fit” with.  Most importantly, when one door shut, I didn't pack my things and go home.  I entered through the door that was left open for me and made the most of it.  I’ve never been happier than I am today.  Not getting what you want isn't always such a bad thing, so I don’t worry so much anymore when life isn't going exactly according to plan.  I guess my mother was right.
Posted by Canvases And Controversies at 9:08 AM