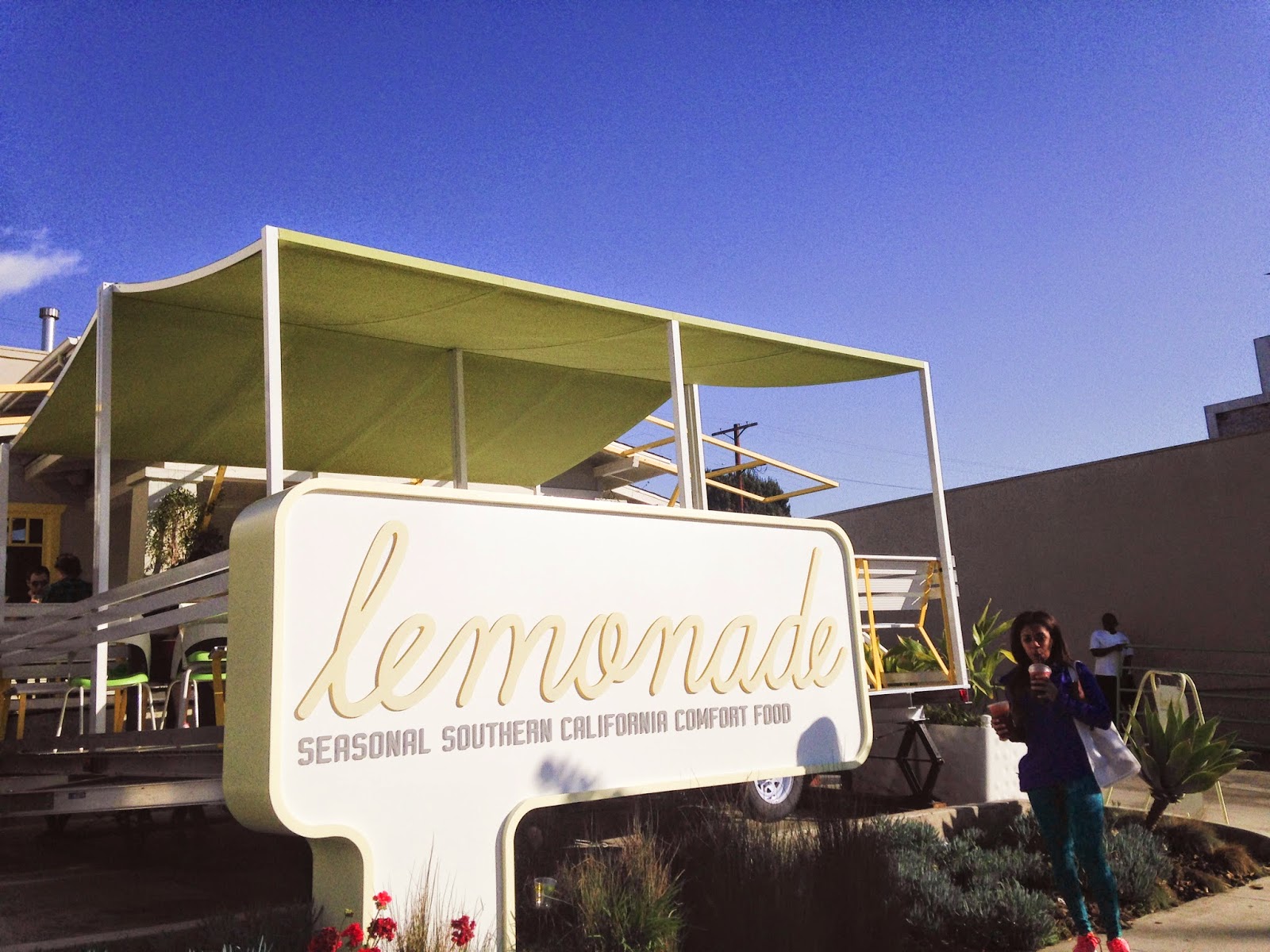 It's not often that I get to go out and really enjoy the city of LA. I'm normally busy working on something for school, working at the DA, or just being too lazy to actually get out there. This weekend my friend and I made a spontaneous decision to just go walk around, shop etc. in Hancock Park. I've driven through Hancock a couple of times but never really stopped to see what it had to offer. Well today I learned that Larchmont Boulevard is THE spot. I would definitely recommend stopping by to anyone visiting the LA area. It's just such a lovely way to spend an afternoon. We stopped at the Lemonade there and this particular location was just so much cuter to me than the Lemonade that I normally go to in Westlake Village. 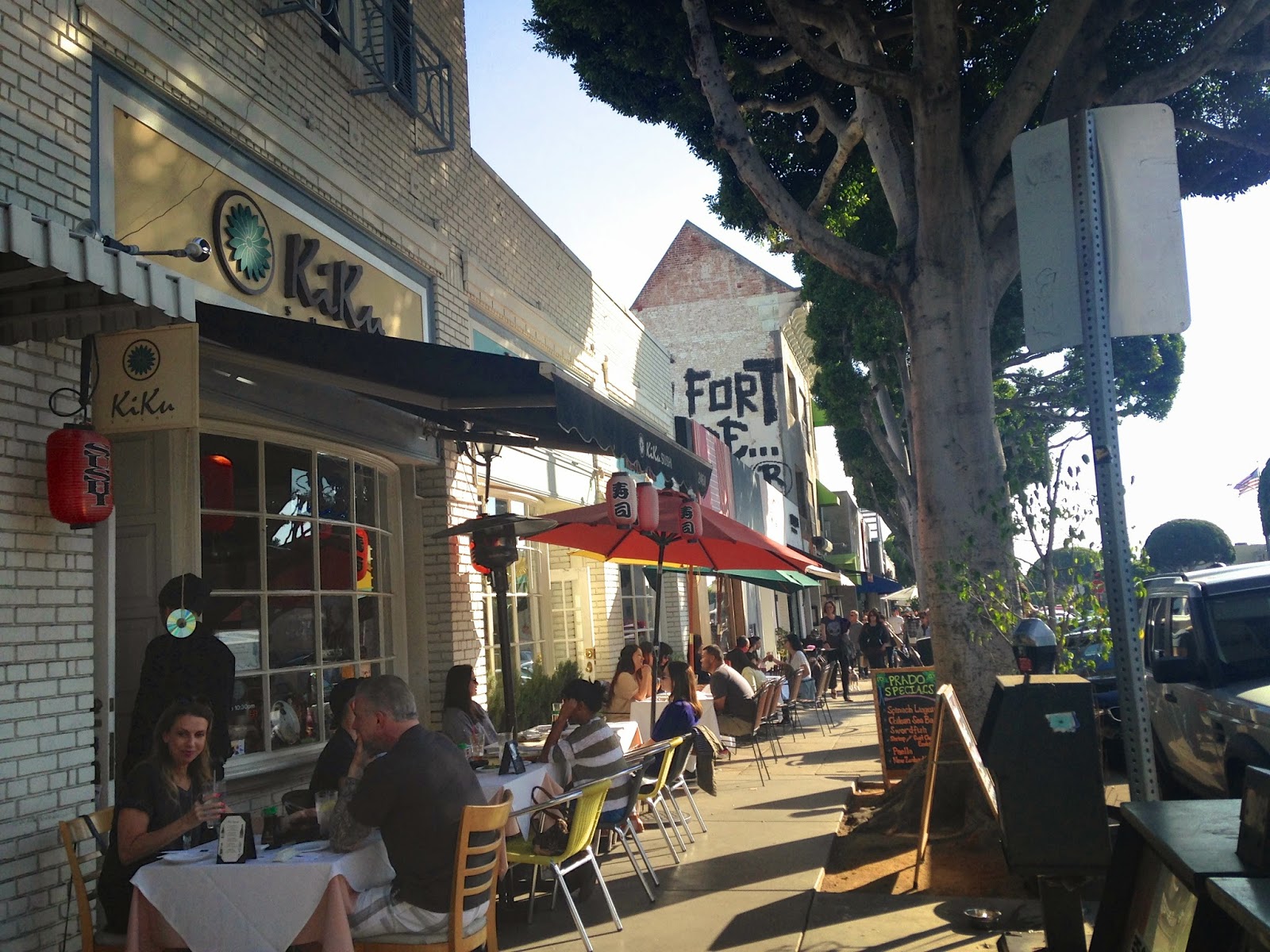 They have a variety of stores to shop at. My personal favorite was a store called Hardwear. It had a lot of really cute pieces at really affordable prices. It also had (what appeared to be) handmade jewellery at the front of the store and the pieces were so pretty. I definitely need to go back there. There were also awesome interior design stores with unique accessories for the home. I definitely think its a great place to go if you're looking to purchase something that not everyone else will have. 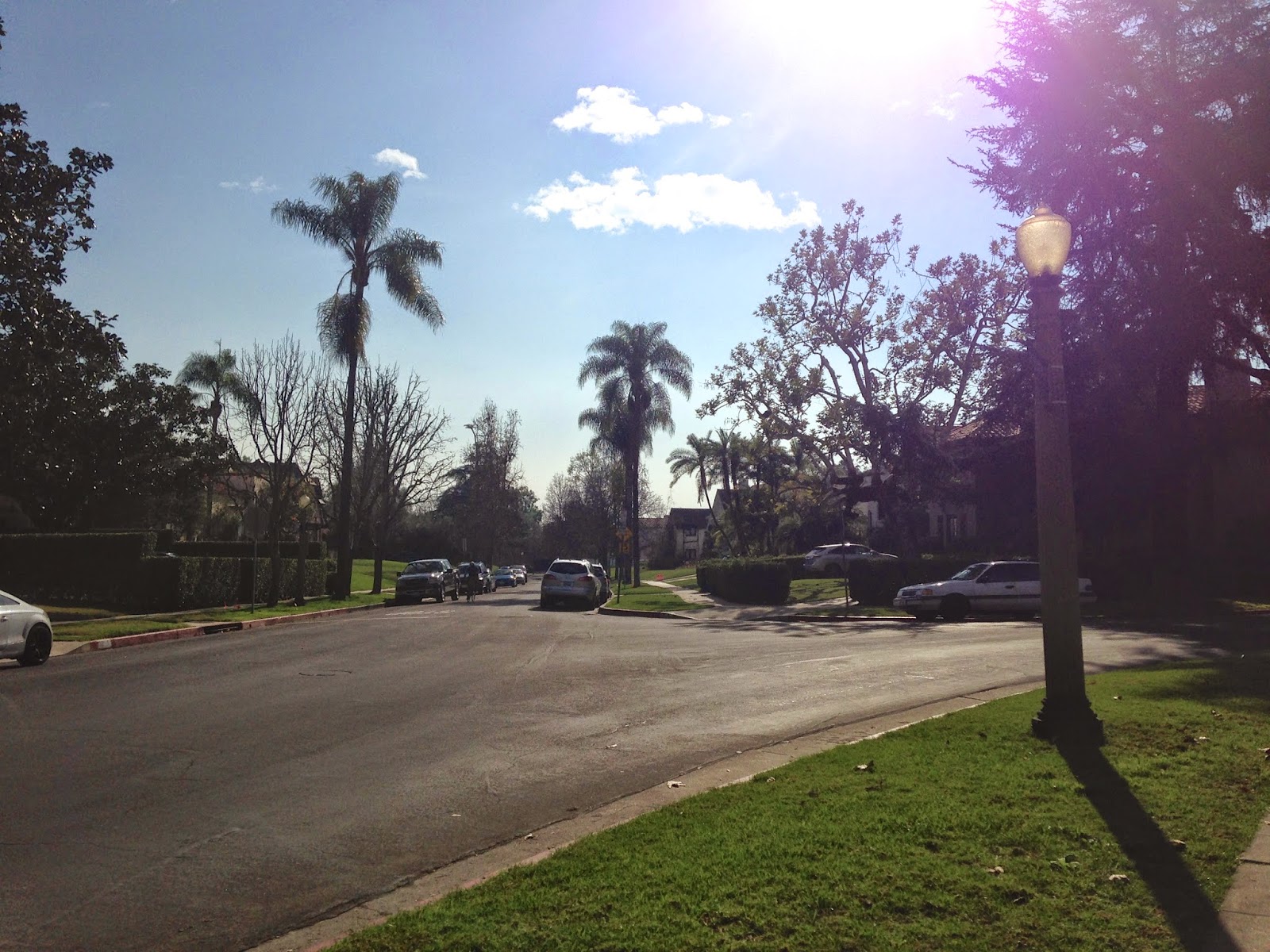 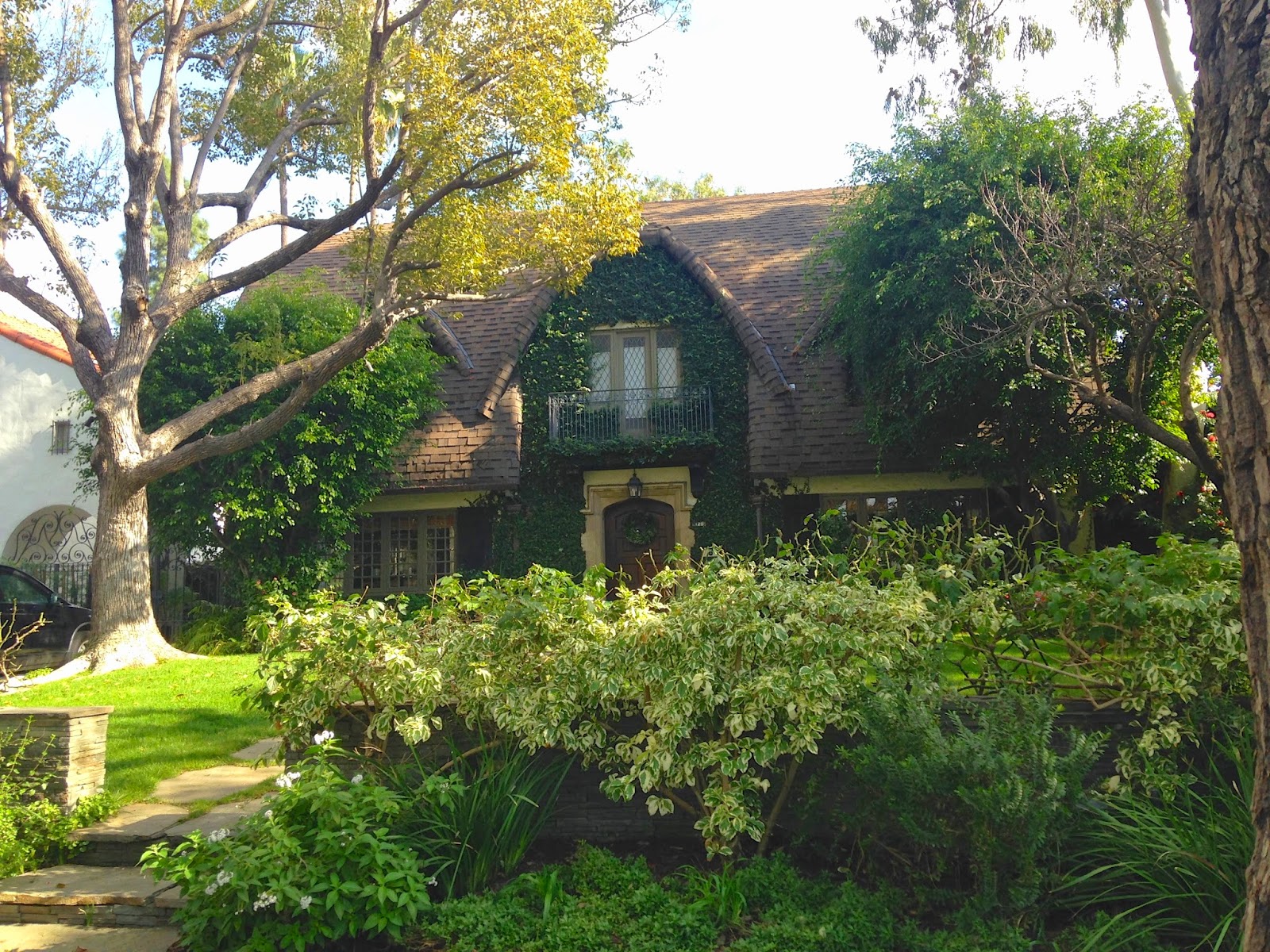 Lastly, my favorite part of our day was seeing all the beautiful homes in the area. I love pretty homes and picking out my "dream homes." I honestly have dream homes in every city I go to. It's just one of my favorite things to do and I find it to be pretty inspiring honestly. Seeing them makes me want to work that much harder so that obviously, one day, I can have them! My particular favorite was this house. Hopefully the owners don't mind me snapping photos LOL. Anyway, I just think it's the cutest place. It has kind of a suburban feel to it I think but it's still in the city. The front lawn was so big and well cared for. It just seemed "homey." I'm generally not into the super huge modern mansions that everyone loves (although I would not decline the offer if someone wanted to give me one). I just like really nice houses that seem like family homes. So yes, if you're ever in the neighborhood you should also take a stroll around to check out some of the homes.

Today really made me want to do a little more exploring in the city and check out other neighborhoods that I've overlooked. Let me know if there are any really neat places in LA that you know of! Also, I'm including a link here to a tour of Larchmont Boulevard from TimeOut. Hope you enjoy.
Posted by Canvases And Controversies at 8:22 PM 25 comments: 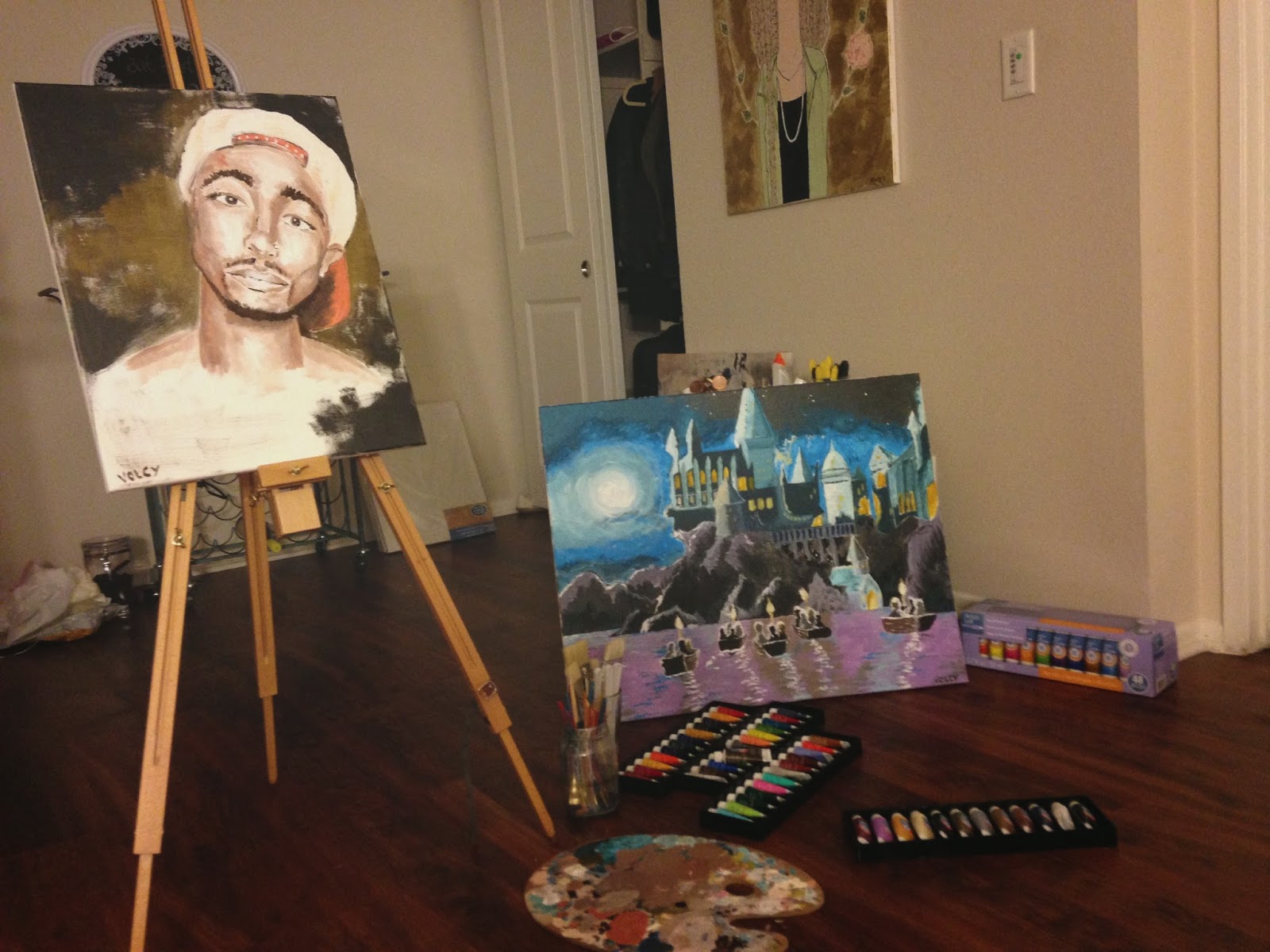 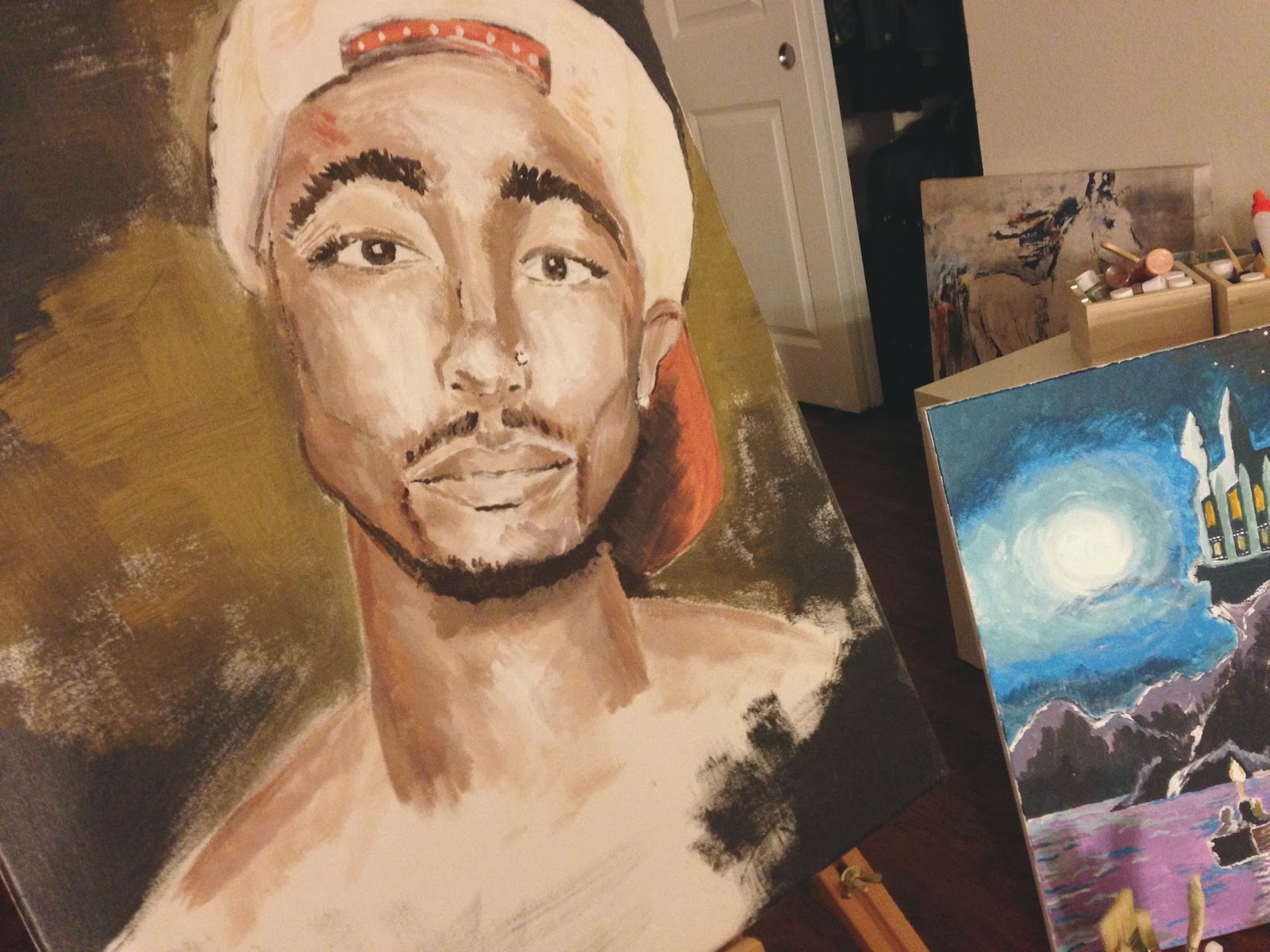 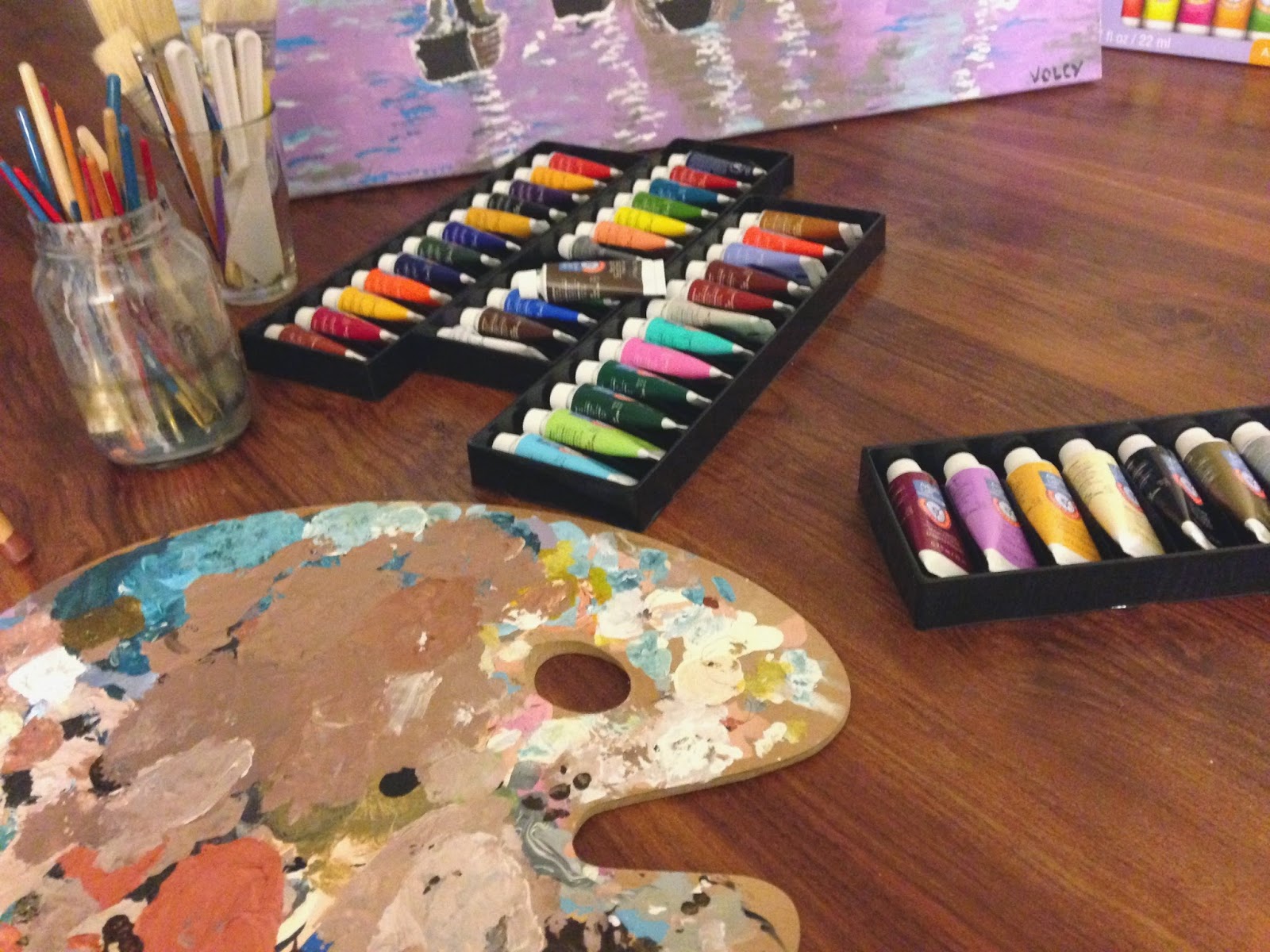 I've always enjoyed art and was pretty decent at drawing cartoons etc. as a child.  At some point, I gave up my dream of becoming an artist/cartoonist/computer-animator and decided to focus on something that I thought to be a little more lucrative... law!  Well ... I mean I guess it's still A LITTLE more lucrative!  Anyway, last semester while doodling in class, a friend of mine asked me if I ever painted.  I wasn't painting at the time but I decided to give it a shot.  I drove to Michaels and purchased a few canvases and some paint.  Turns out, I really enjoy painting!  It's a great way to take my mind off of law school sometimes and just what I need to relax after a long day.

Well, now that I have a somewhat growing gallery in my little apartment, I decided to (1) start selling some of these paintings off and (2) try my luck at commissioning a few art pieces.  I set up an Instagram account for my work called CanvasesAndControversies because I'm a law student who paints ... so I deal with canvases and controversies.  Get it?  No?  Okay.  Well anyway, if you're interested, feel free to check it out.  I will leave the link to my new art Instagram below.  Let me know what you like to do in your spare time when you need a break from life.  I'd love to hear :)

Yes, I'm aware that nearly everyone has this bootie in some form or another. I too own a pair but they aren't leather, they're those snakeskin/crocodile Material Girl ones? I don't know exactly how to describe them but the point is, they were not giving me that LOOK I was trying to achieve. You know the look ... 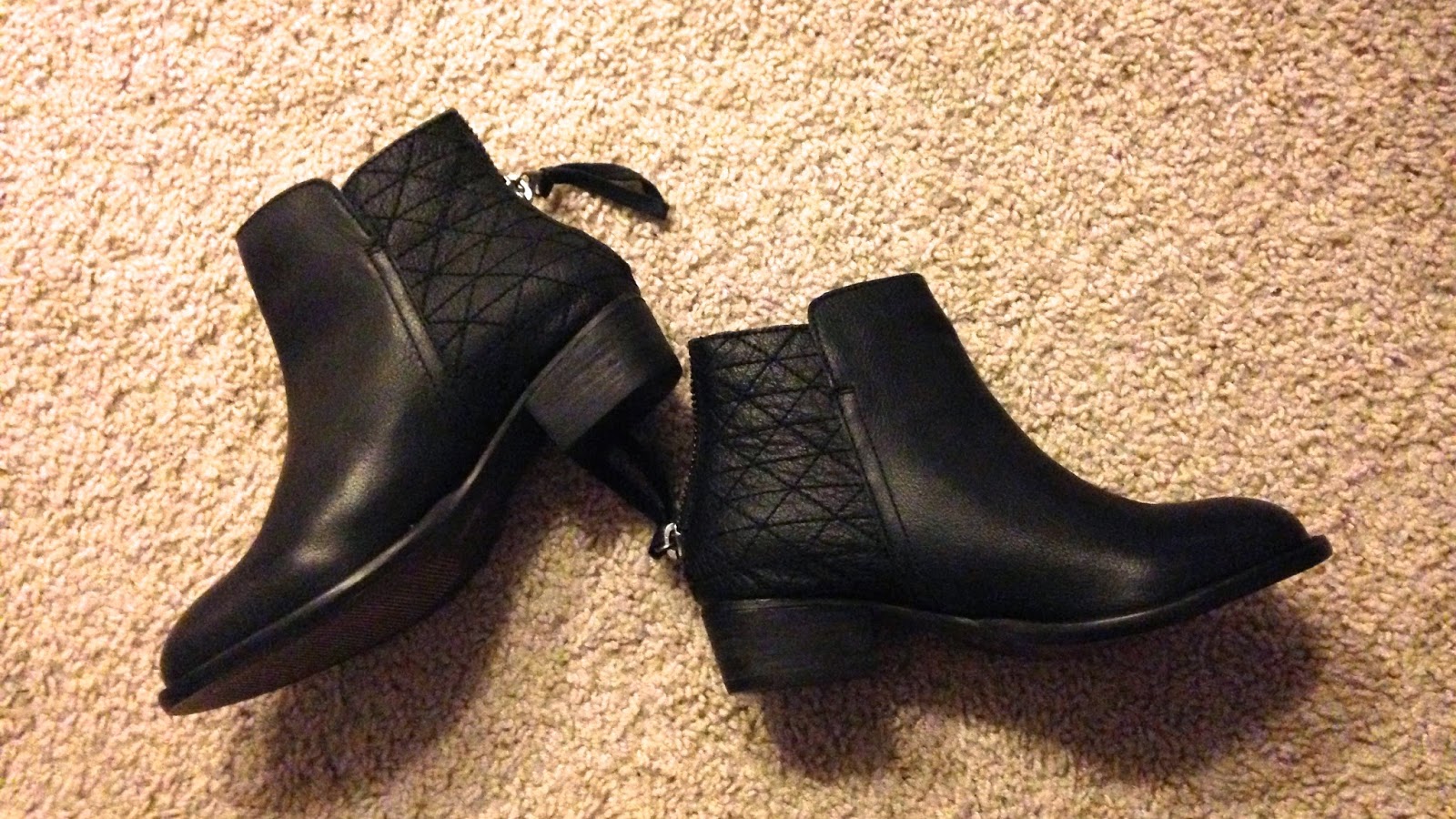 
Anyway, I knew that I would be on the hunt for these boots as soon as I got back to California. I am trying to buy less clothes etc. in 2015 so I am choosing to stick with some more classic/basic items that I can incorporate into a number of outfits. I do want to start putting up some new outfit posts since I know that it's been a while since I've done that.  Be warned, once I do, you will be seeing these booties A LOT because I love them. I don't remember the exact name of this particular boot, but they are Steve Madden, they were on sale, and that is all I needed to know at the time. Since I don't have any outfit posts to include just yet, I thought I would post some of my favorite "black bootie outfits" from around the web. I hope you enjoy :)

Also, this is completely unrelated but I am looking for new/different blogs to follow in 2015. I really want to update my Daily Reads section on the side of my blog so I need your help.  If you know of any blogs you think I might like, please leave a comment below :) I will definitely check them out when I have a chance. Thanks!

Posted by Canvases And Controversies at 9:43 PM 36 comments: 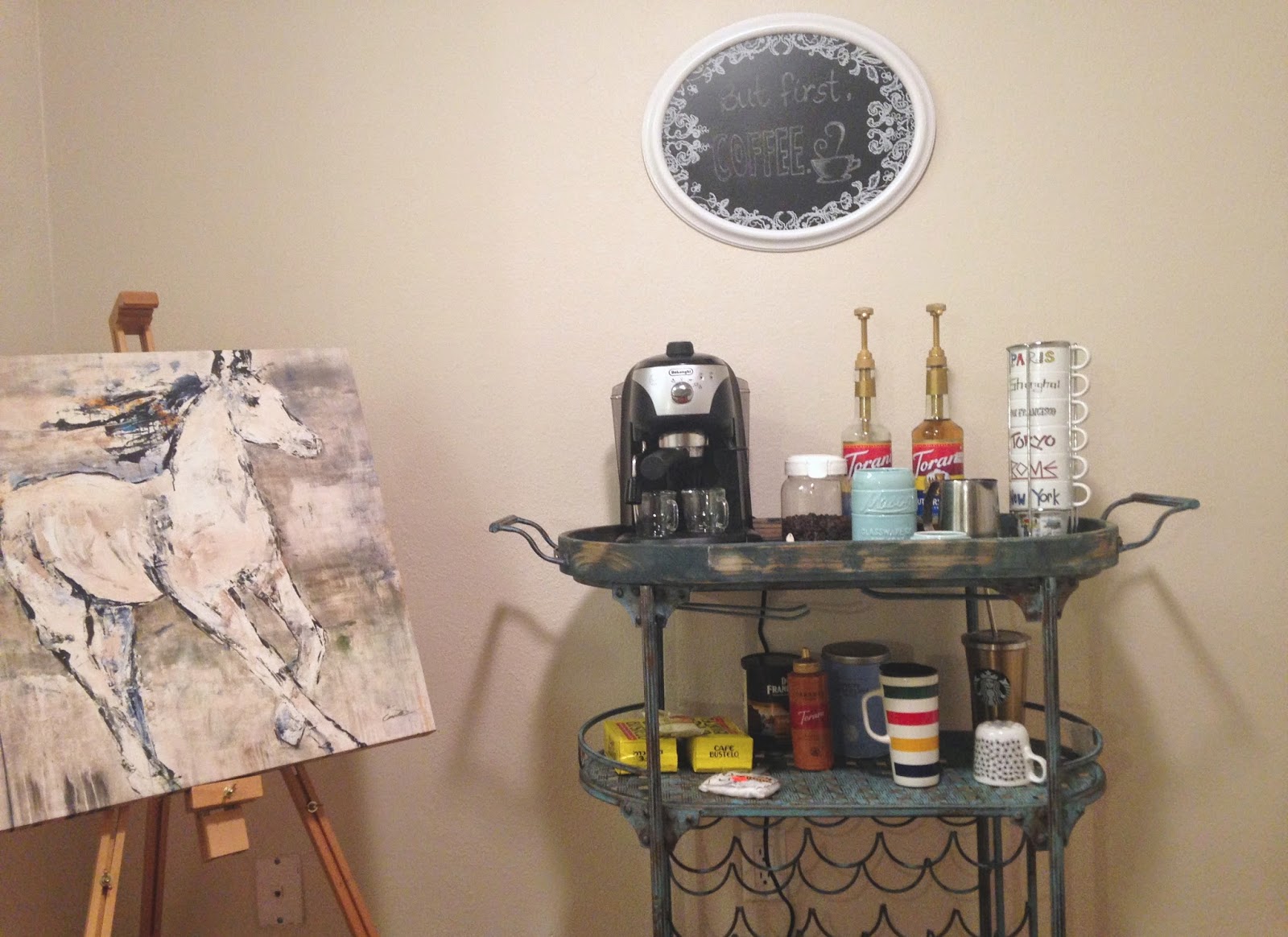 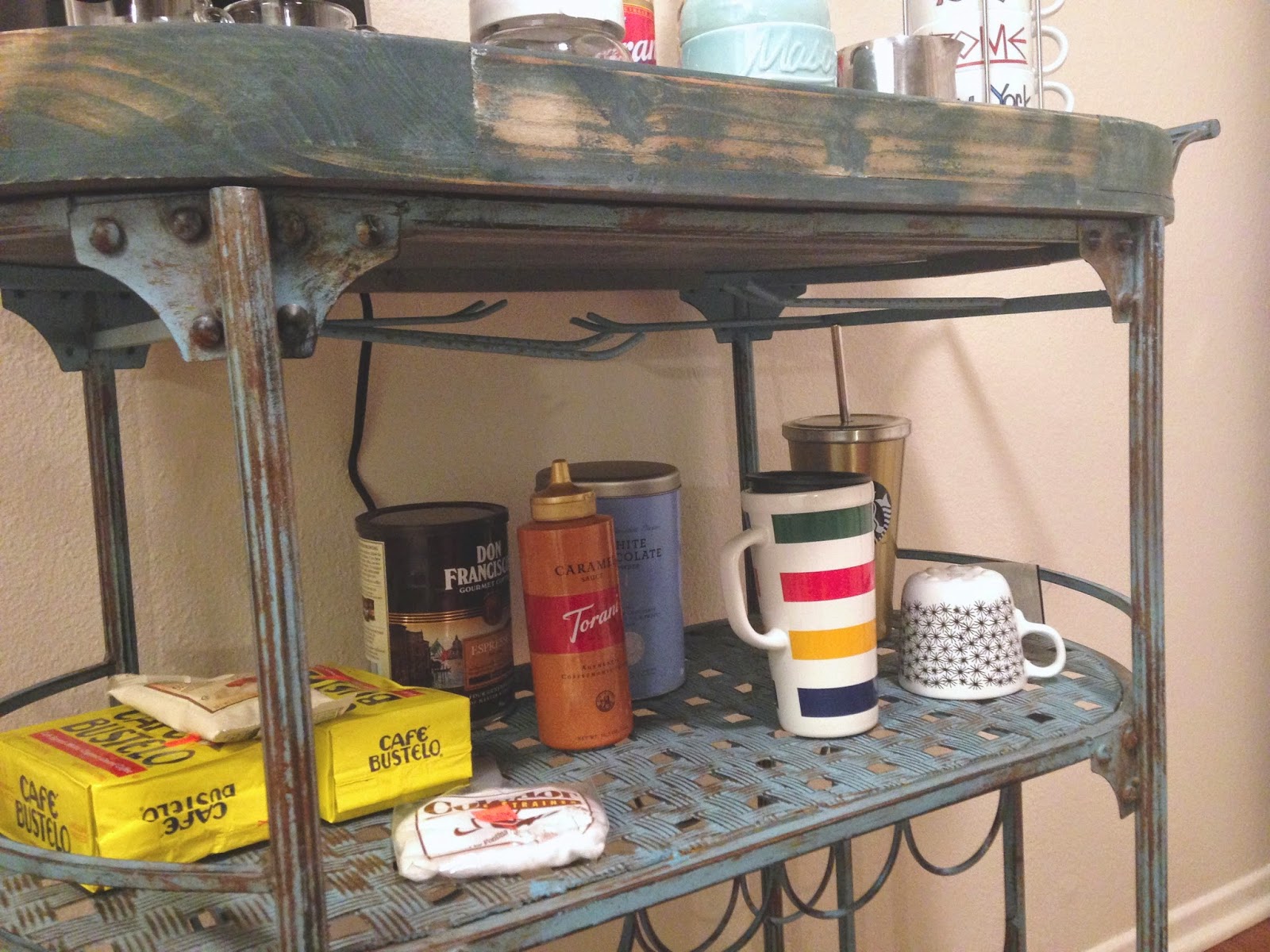 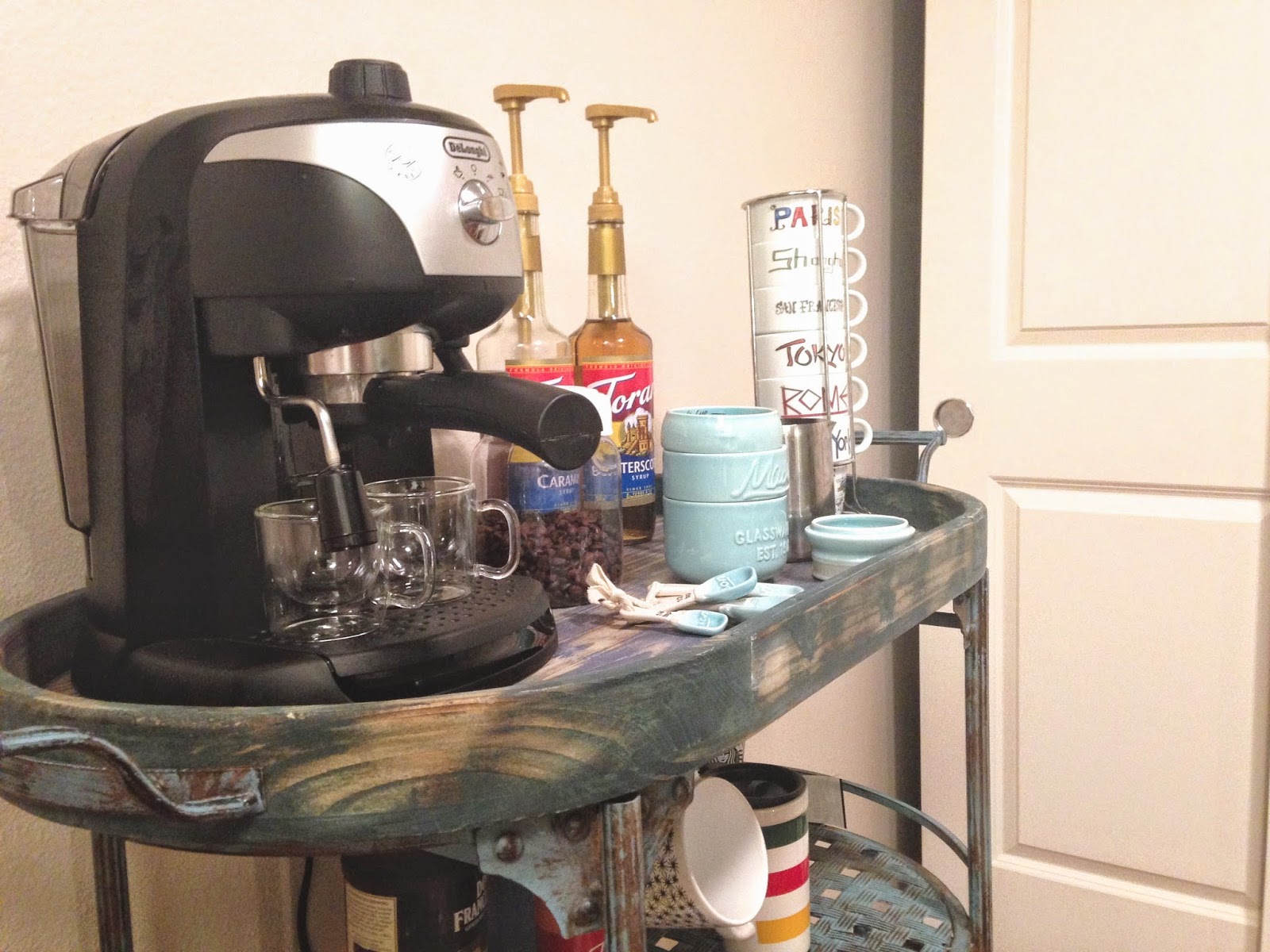 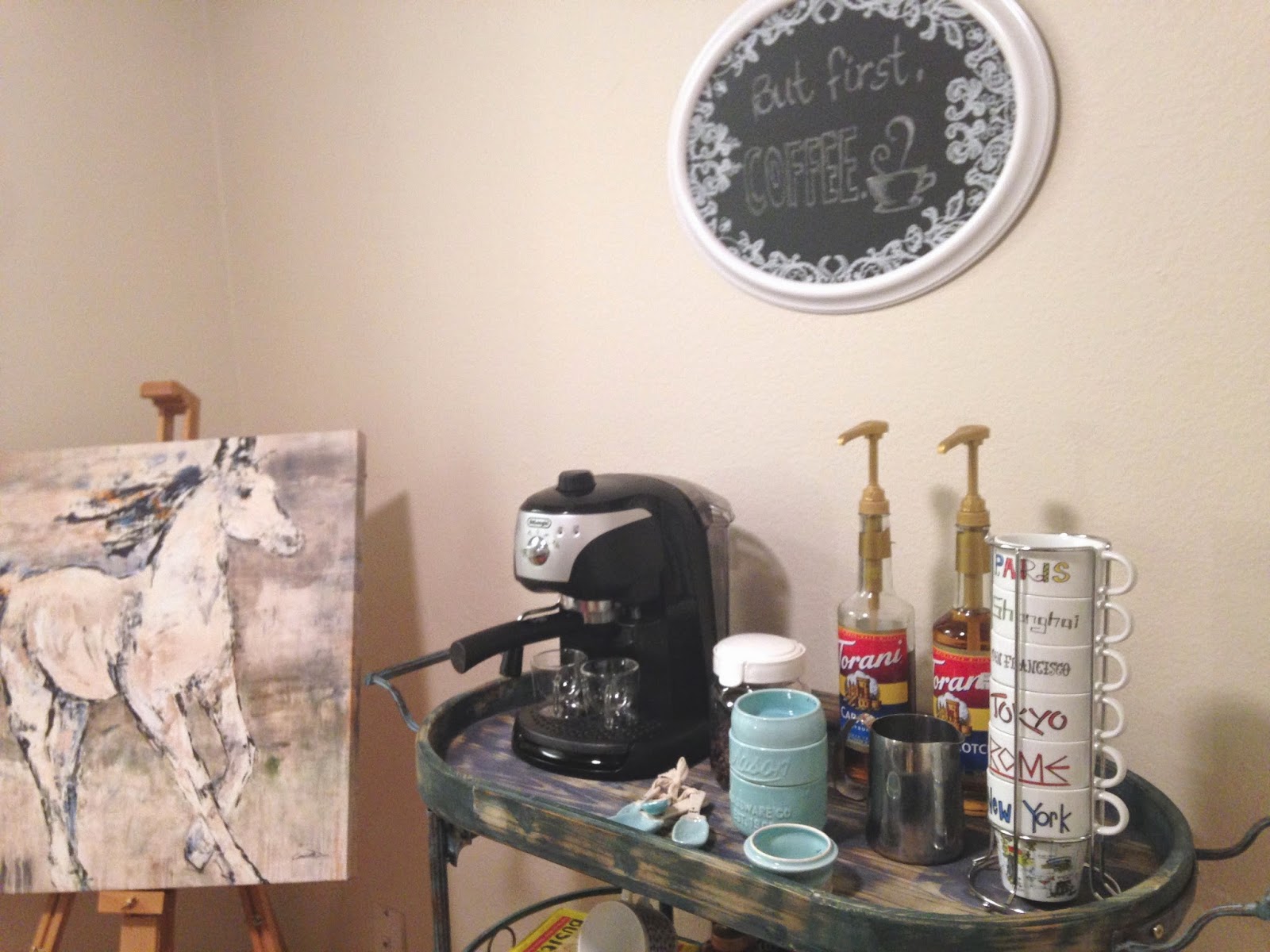 Disclaimer: I did not paint that horse painting on the easel right now. I just haven't found anywhere to hang it yet so that's just where I put it. I do paint though! HOLLA if you want some art :)

I mentioned sometime last year that I was thinking of setting up a little coffee bar in my apartment.  This past weekend, I actually found the perfect little cart. It's kind of old and rustic looking, which really fits the vibe of my place I.e. everything I own looks old LOL. But anyway, I was so excited to bring it home and finally get my little coffee corner!

I obviously keep the Espresso machine, syrups and mugs on the top shelf.  Anything that I need immediate access to basically goes up there. I was really happy when I went to World Market and found the big Torani bottles, especially in Caramel. For some reason, the grocery stores by my place only carry the smaller Torani bottles and the only Caramel they carry is sugar-free. I hate sugar-free anything so it's the most annoying thing. Just give me my sugar.  I also have these cute mason jar measuring cups and spoons that I received as a gift for the holidays.  They are so cute and definitely deserved a spot on the top shelf.

Beneath I just keep extra ground espresso, or flavored powders/syrups.  I also keep a few of my tumblers or mugs.  I especially love my Hudson's Bay tumbler that I purchased over the break. I made a promise to myself to embrace my Canadian/Toronto roots more as I'm in California so I'm starting by repping good ol' Hudson's Bay!

I also found this little chalkboard at Target, so I just scribbled something about coffee on it and hung it above my cart. So far, I'm pretty satisfied with it ... but I may make changes eventually. Let me know if you have any suggestions.
Posted by Canvases And Controversies at 7:48 PM 63 comments:

Off To A Good Start 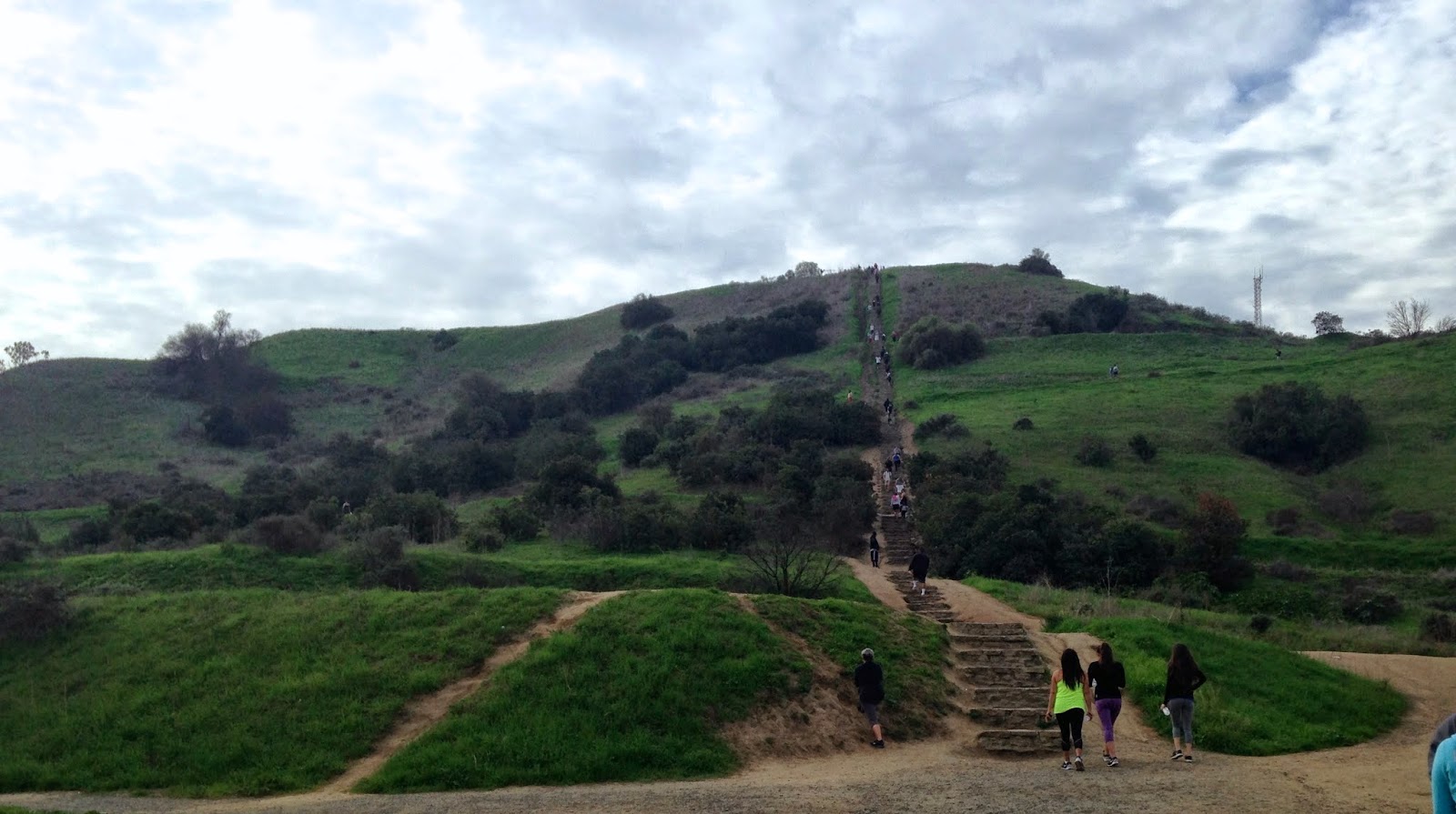 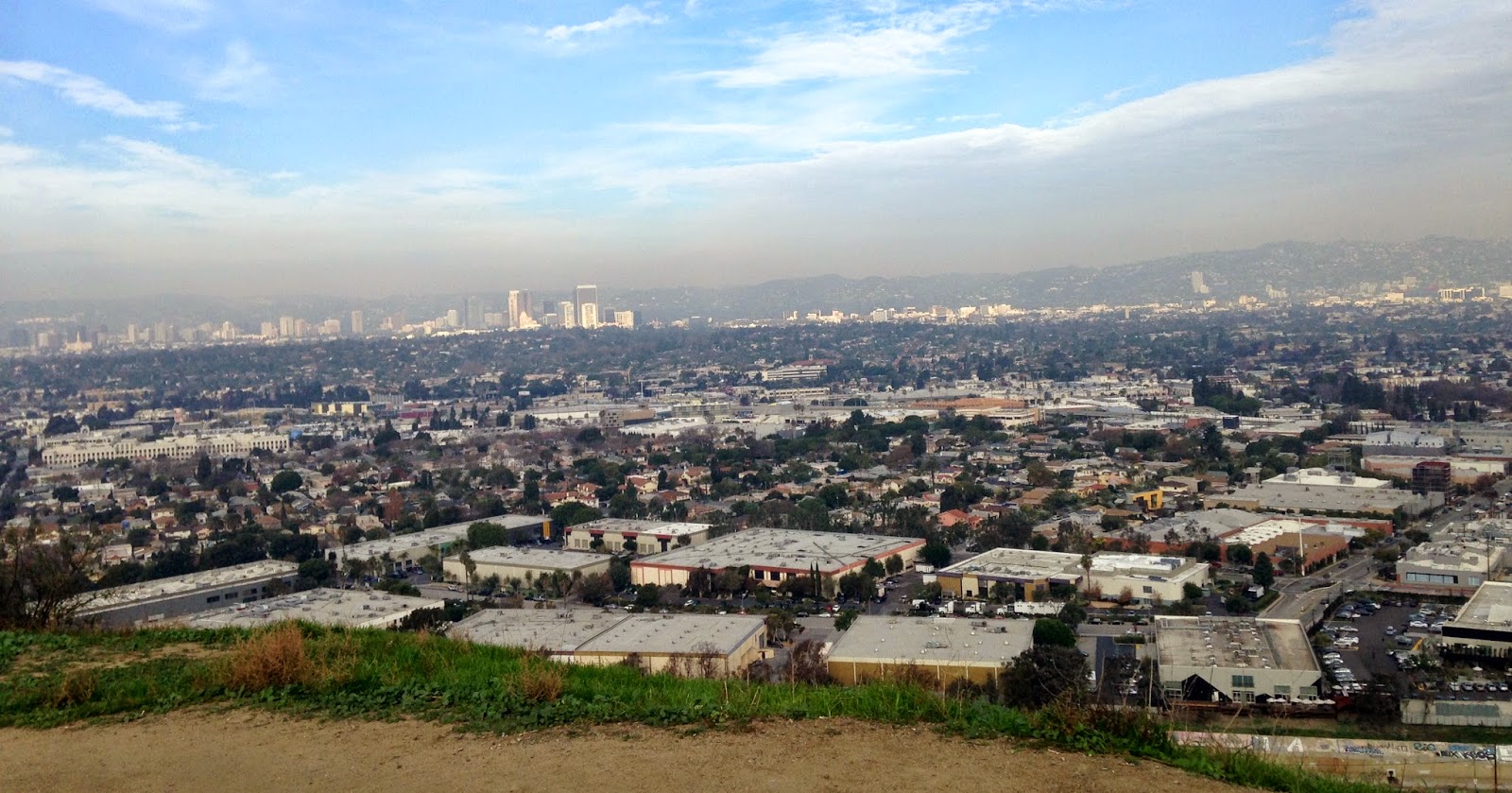 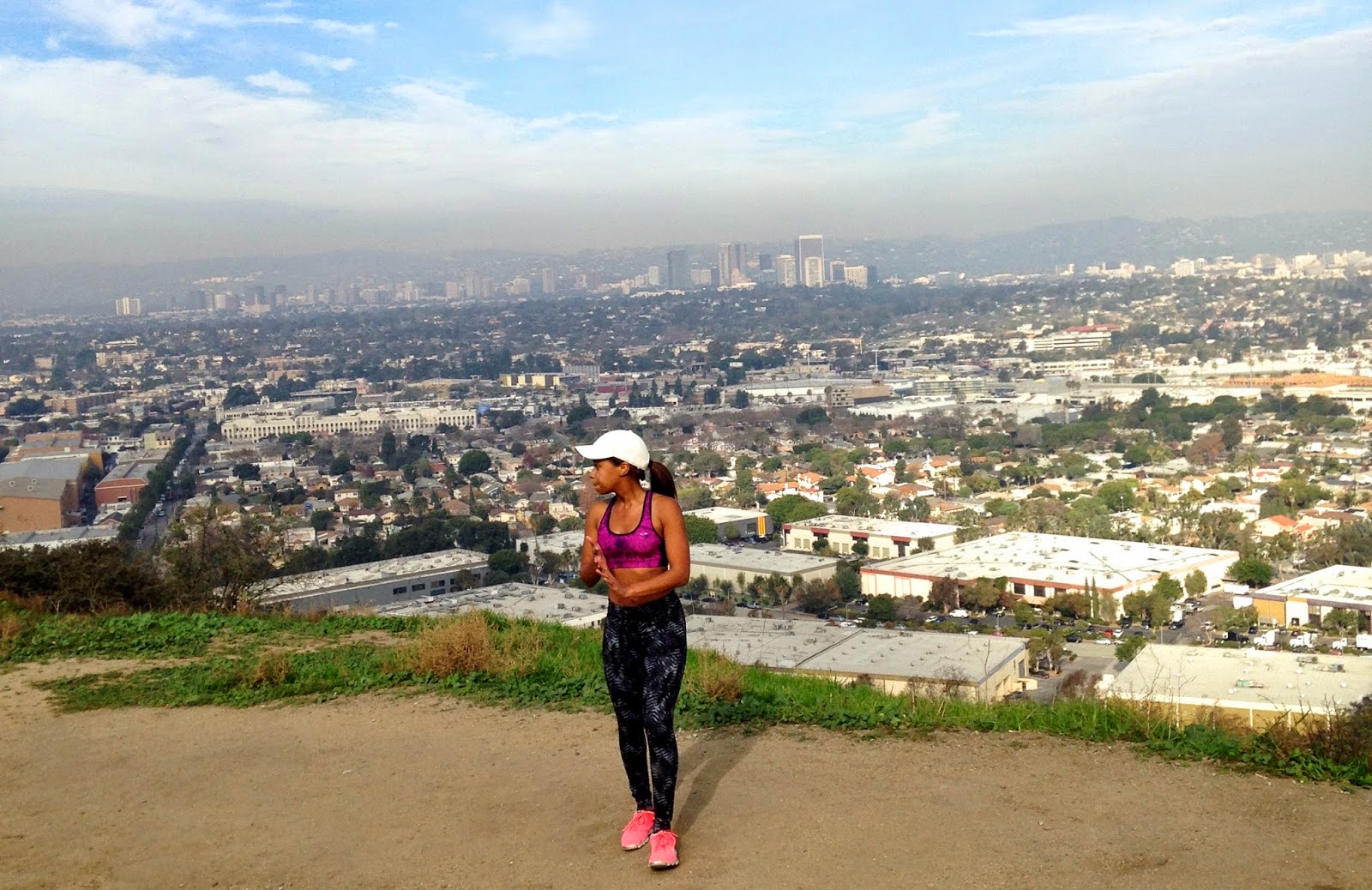 I know that I never made an official "goodbye 2014" or "hello 2015" post.  I was honestly just enjoying being home and being lazy.  I slept for most of my break and didn't do much of anything - it was the greatest break ever!

Now that I'm back in California, I am working on the few minor changes I planned on making this year.  Since I don't have class on Fridays, one of my good friends and I are going to use that day as our workout day.  Of course I will work out during the week as well ... but that will be our official "go hard" day.  Since yesterday was Friday, we decided to get out and do the Culver City Stairs.  The stairs are such a good leg and butt workout so I really enjoyed doing them.  Some of the steps are so steep in between that you're literally just lunging up the mountain.
Our original plan was to do four rounds, but after going up twice I was just so hungry (we hadn't eaten at all before this point) so I just needed brunch immediately.  Next time I'll be smart and actually eat first, so that we can do the full four rounds.

The view from the top of the stairs is amazing, as you can see pretty much the entire city of Los Angeles.  There is also enough room up there for you to do some more exercise if you wanted to before heading back down.

So yea, I would say that 2015 goals are off to a good start.  Hopefully we stay committed so that our bodies are super toned and amazing by the time Memorial Day Weekend rolls around.

Summer bodies are built in the winter!
(Even though it's kind of always summer out here)
Posted by Canvases And Controversies at 12:35 PM 51 comments: